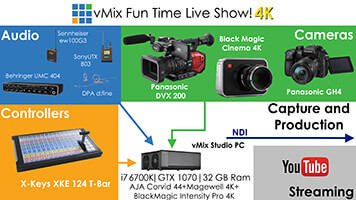 We looked at 4K live video production on our latest vMix Fun Time Live Show. Yes, 4K with a software switcher. It seemed like a fun experiment to switch our entire show out with 4K cameras, titles, and videos! So…that’s what we did. We assembled all of our 4K cards, cameras, and spent time creating everything in 4K. Then we put them all together with our off the shelf PC parts.Here’s a quick shot of our components for our 4K production. 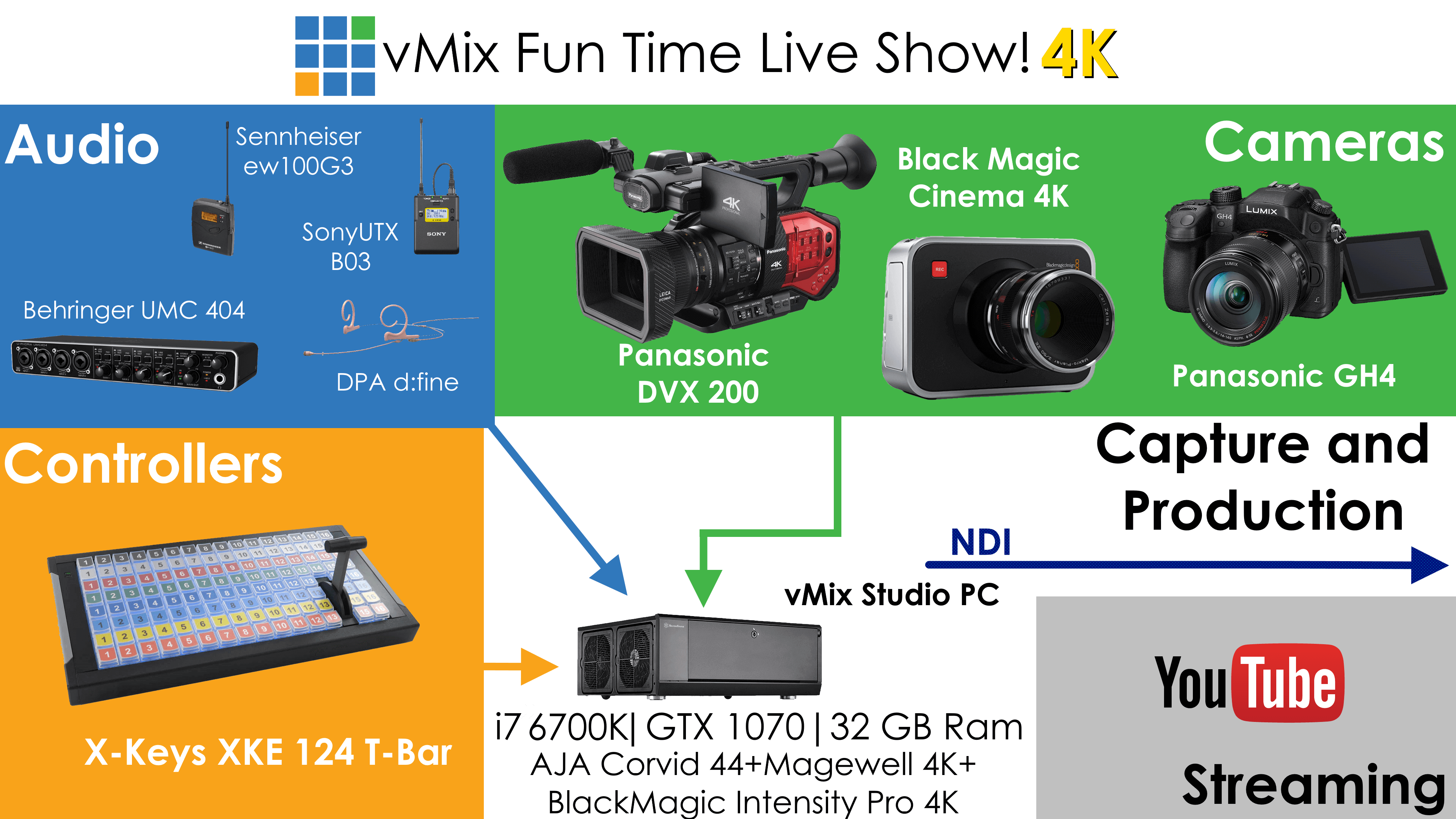 Here’s what we learned….

Doing everything in 4K seems great until you realise it’s 4X HD!

That’s right! 4K is 4 times the size of everything that you’re used to with HD! For example our usual 4 HD camera production is now 16 HD cameras if we use 4 4K camera sources! Not only that, but you have to consider that all of your video sources are now 4 HD videos. Then add on top of that…4HD records and 4HD Streams! That turns out to be A LOT of bandwidth that your system needs to handle.

You also need to factor in that all of your sources should be 4K now. So any videos, graphics and titles that you use will need to be 4 times bigger. This becomes interesting as your need to consider the extra time needed for rendering 4K videos with your favourite NLE such as Premiere. My computer nearly caught fire with all the 4K rendering!

Off the shelf parts and the X99

For our production we went with parts we purchased from the local computer shop. We started working with the X99 as we needed the right number of lanes for the PCIe cards needed for 4K. We needed to be able to run 1×1070 GFX card along side 3x4K capture cards. We came across a few snags with the x99 and didn’t have time to fully test it out before the show. As a result we opted for a Z170 Gigabyte Gaming G1 motherboard which has a PLX chip installed and allows you to share bandwidth across the PCIe slots. This enabled us to use 3 capture cards and the GTX 1070.

In the future we look to test the X99 more rigorously and perhaps upgrade to XEON and Quadro infrastructure.

Record and Stream Via NDI

We decided that it would be best for us to split up some of the production duties to a 2nd PC. Afterall, we did want the actual live stream to work! We don’t typically like to do this but due to our limited time and not being able to use the x99 we decided it would be best. NDI to the rescue! We’ve built a mid range PC that we’ve been using for beta testing that has a NVIDIA 1060 in it. We set up vMix in that and then connected to our Studio PC via NDI and used it for streaming in HD to YouTube and Recording in 25mb 4K MP4. That’s the beauty of NDI, you’re able to easily had off duties to other PCs without any issues!

Not many people can actually watch a 4K live stream!

We realised throughout this process that sending out a 4K live stream wasn’t going to be the best idea right now. Mainly because people can’t watch it because

Youtube appears to accept a 4K stream but only allows for a 2K live playback of the stream. We imagine that this is due to the sheer processing power required to pull off 4K transcoding. There are companies out there that will do it, but it’s a fairly large exercise on their behalf. Never say never though, as we have discussed it with some streaming providers! We decided that ultimately a HD stream and 4K YouTube upload would be sufficient for now.

This has been a very interesting experience indeed. It will be great to continue our advancement into the 4K realm and working out what specs will be most efficient for multi camera 4K live production moving forward!