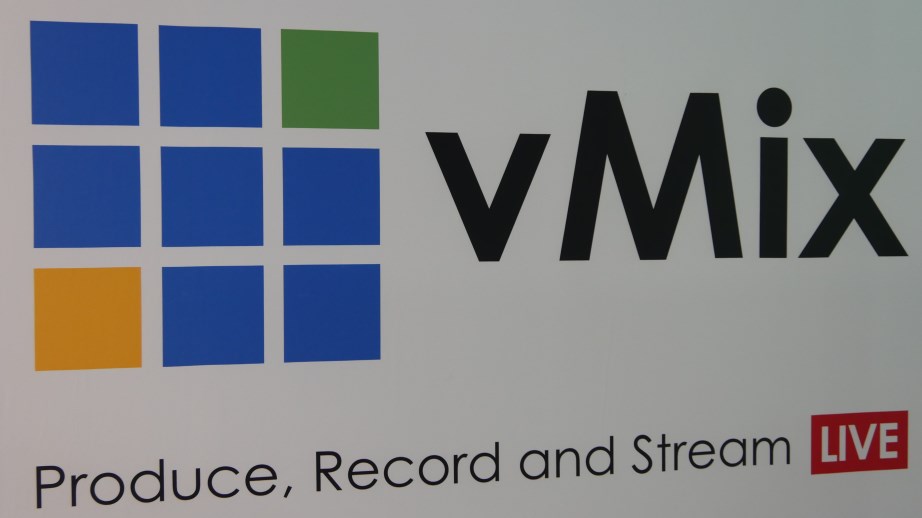 The NAB Show has come and gone for another year and this year was a big one for vMix! We more than doubled our booth size, added 2 more workstations and also added a live stage! We had 5 cameras running, 6 huge TVs,  and most importantly a lounge to sit at! 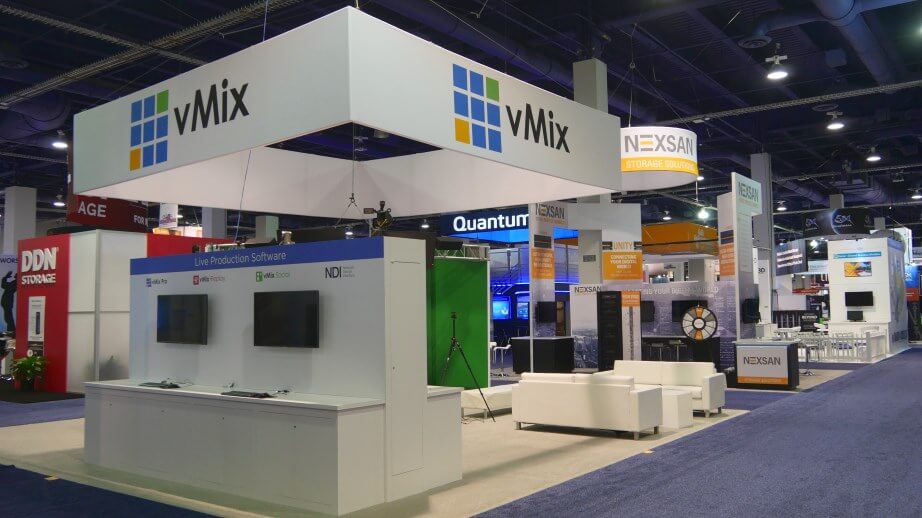 We were located in the South Lower Hall this year which meant a lot more foot traffic than last year. That was great for vMix! We were within eye sight of the Newtek booth and we had plenty of people come through and ask about vMix and NDI. The booth was open and spacious and even became quite crowded at times with people watching the live show or getting a demo of the best live streaming software there is! 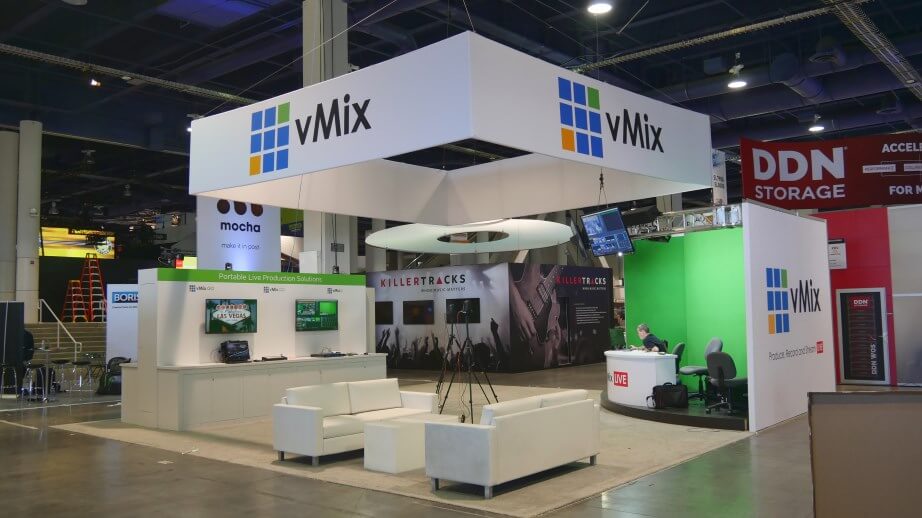 On our 4 workstations, we had 2 running vMix Pro software on PCs, a vMix U and a vMix GO. People were really able to try out all of the new features in vMix 17. We had a MIDI device, and XBOX controller for PTZ control, a Control Surface and an iPad to use on the vMix Web Controller! 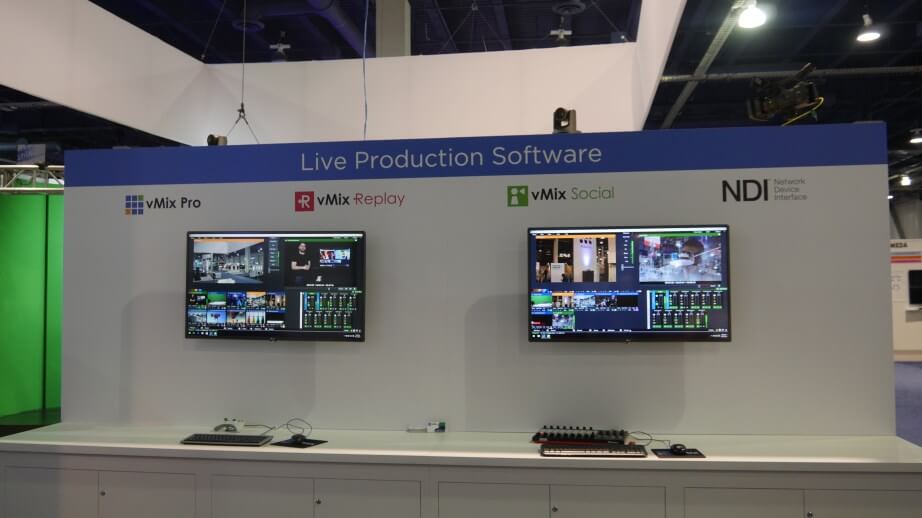 Each day we ran a live show with product announcements, demos and tutorials. The LiveX crew took over the stage for an hour a day to do the Teradek Live Show…from our booth! It was a great production with the video being sent live from the South Lower Hall to the Central Hall and then streamed out! It was nice to see actual production, and we took a few notes for our own live shows. ;). They also use the vMix GO to produce the Teradek Live Show for every day of the show! This is the 3rd year in a row! 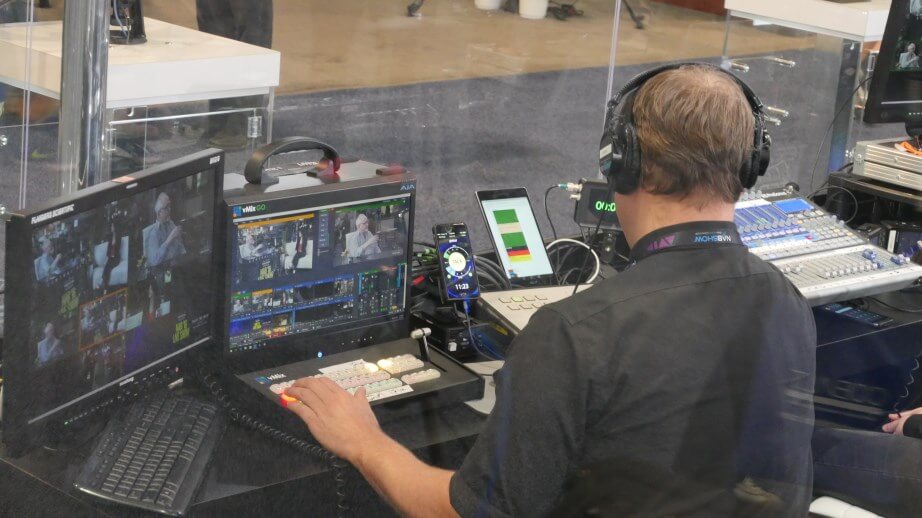 Big thanks to everyone that stopped by to support vMix! It was great to be able to show every one all the cool new features of vMix 17 with NDI, PTZ controls and Web Browser inputs! We really do think it’s the best live production software out there! 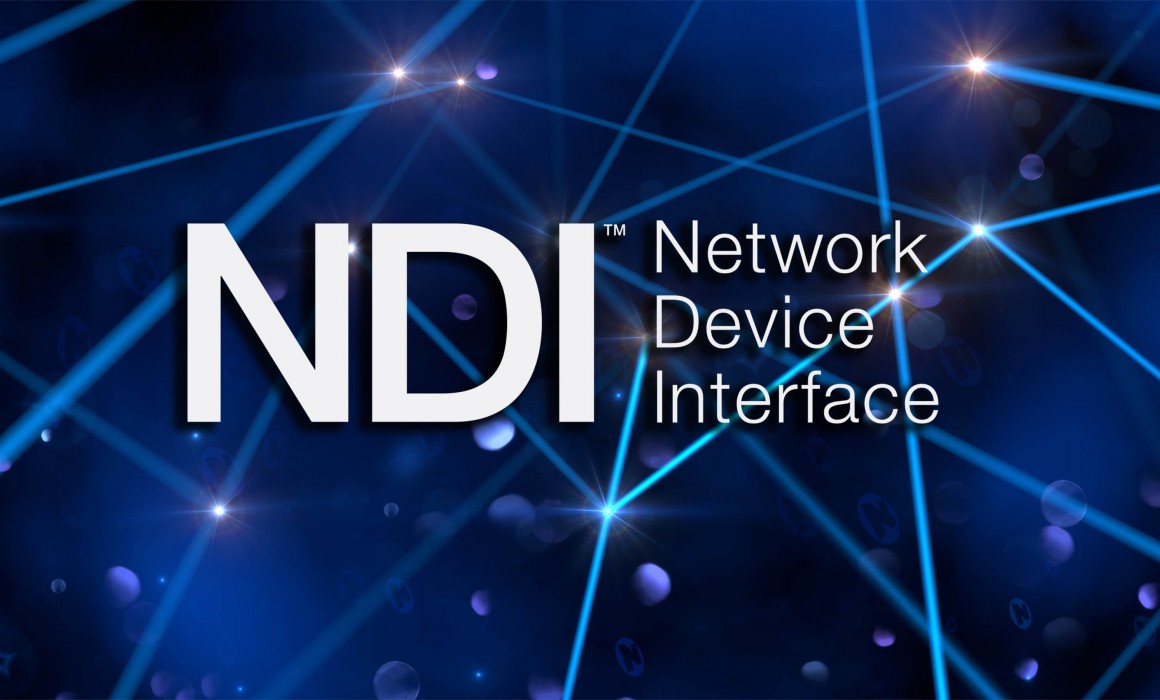 If you’ve been around for a little while, you’ll know that here at vMix we’ve gone all in on NDI. We can see NDI really changing the landscape of live video production through IP connectivity. Being able to add camera sources, production outputs, graphics etc all through the network will drastically change most production workflows.

To find out more information about NDI and how to use it in your vMix production head over to our new dedication vMix and NDI page on our website.

Now you can stop asking “does vMix work with NDI” and ask “how can I make my vMix production even better through NDI!”

This month’s vMix Fun Time Live Show will be jam-packed with all sorts of exciting new features and products! We have continued work on integrating the Newtek NDI protocol into vMix so we’ll be showing how we’ve improved an existing feature using that. That means another live demonstration of the Newtek NDI protocol! There aren’t too many other people offering live demos so this is a great opportunity to check it out and ask questions!

We had plenty of people ask about it so we’ll be doing a short review of the Numark Orbit MIDI device.

It’s going to be a very busy show, so if you have some questions think of them now so you don’t forget!

If you want to see all of these features up and running LIVE IN PERSON, then feel free to drop by our booth at the National Association of Broadcasters (NAB) convention in Las Vegas. NAB will be a great way to get hands on with vMix 17 and join us for some LIVE tutorials. It is also a great opportunity to visit camera, capture card and other manufacturers and see all of their new products. We’re at booth SL7920, click here for a map. Many of our partners will be there, so it’s a great place to network and meet the people behind the products that you use.

If you are going to NAB, click here to register and use our guest pass code LV6897 to get a Free Exhibits-Only Pass.