The NDI journey with vMix…so far.

Back in 2014 when we first heard about NDI, we were pretty excited about the possibilities. Being able to create live video productions using video sources on the local network sounded almost too good to be true. At first I remember being a little skeptical as my only contact with IP video was with cheap IP cameras that were unreliable and had extreme latency. As we begun developing vMix for use with NDI I can remember having a moment thinking…hey this could actually work! It’s great quality, low latency video that can be delivered over the local network without any hassles! When NDI officially launched in 2015 we were excited to be apart of a new live video revolution. We were ALL IN with NDI and wanted full integration so we made it possible to both send and receive video sources including individual cameras!

With the development of NDI you could see that it had been created to not only make IP video more accessible but to help bring more live video elements together. Most systems for live video production in the past,both software and hardware, were fairly closed ecosystems. Developers would need to go out of their way, sign exclusivity agreements and only work on certain platforms. Now with NDI, each product has the ability to connect with most live video systems on the market. This has really opened the opportunity for more and more professional production through high-end CG graphics, real-time playout, and source sharing…all over a local network. Instead of needing huge hardware surfaces in a giant room to produce events, many functions can now be performed by a computer or laptop in the same room…or anywhere really, as long as they’re on the same network!

Back in 2015 there was a distant dream of having native NDI capture and camera hardware. We said many times…I wonder when we’ll see our first NDI converter or camera…maybe we should make one. Thankfully we didn’t have to wait too long, although it did feel like a fair while. It took an Australian company called BirdDog to enter the market with the promises of a full NDI capable converter with both SDI and HDMI inputs. Not surprisingly being the first to market means that you have to do ALL of the hard work! They took some time to get to market, but now they’re here and you can start adding them to your productions! They have promised some amazing updates that will make this product even better, so stay tuned… 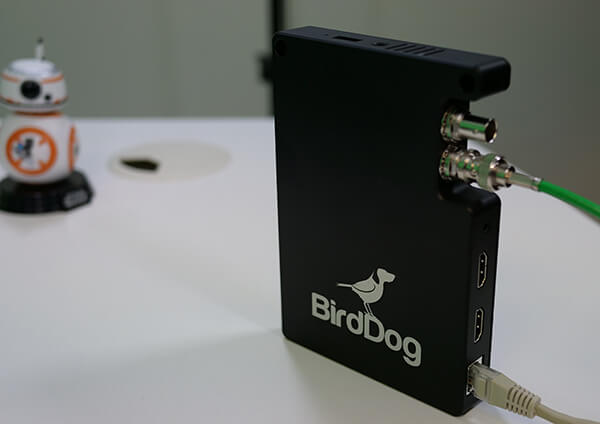 As video transmission for NDI was solely IP based it really opened up different delivery avenues for live video. Sienna developed an app for iOS with NewTek developing their own for iOS and Android a little while later. As they’re only usable with WiFi networks there can be a few issues with interference and quality. There are plenty of people that have great success with the apps and it will be interesting to see if the apps are further developed. This leads us into what happened next in regards to making NDI more efficient for wireless…

As NDI continued to be developed there was a definite need for a version with a lower bandwidth footprint for use with Wireless. We recently spoke with the NewTek™ CTO and President Dr. Andrew Cross and he outlined the importance of a lower bandwidth IP option-

Due to the lower resources required for NDI|HX, we’ve seen the adoption of this format on new hardware hitting the market with even more around the corner I’m sure! One of the great features of NDI|HX is that it can be retrofitted to cameras by using a firmware uprade, so who knows what older model cameras will be reborn by NDI|HX! 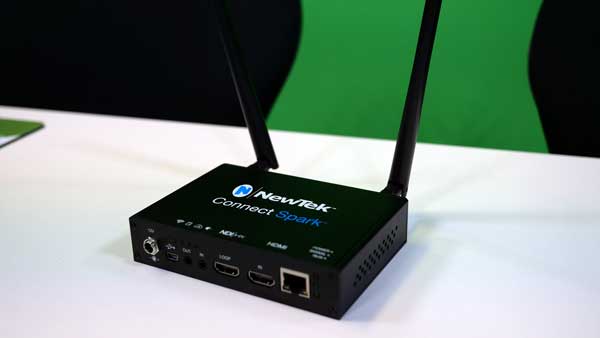 Off the back of the NDI|HX release a new converter was unveiled by NewTek called the Connect Spark. The Connect Spark uses NDI|HX and allows you to send a video signal via an Ethernet port or even wirelessly! This has opened up the ability to use NDI with cameras within wireless range of your production studio network! You could even have the camera mounted on the other side of a field and use the Ethernet port to connect to your network and input into your production. We even rigged up our own power supply and have used it as a completely wireless camera rig!

Alongside the Connect Spark, NewTek announced their very first camera! The PTZ1 is the first NDI capable camera to hit the market! It’s PoE, which allows you to power, control and connect the camera to your production with ONLY ONE CABLE! As productions get nimbler, having a single cable camera helps to lighten the footprint for crews. It’s been great for our studio as it means a lot less cables around to trip on! 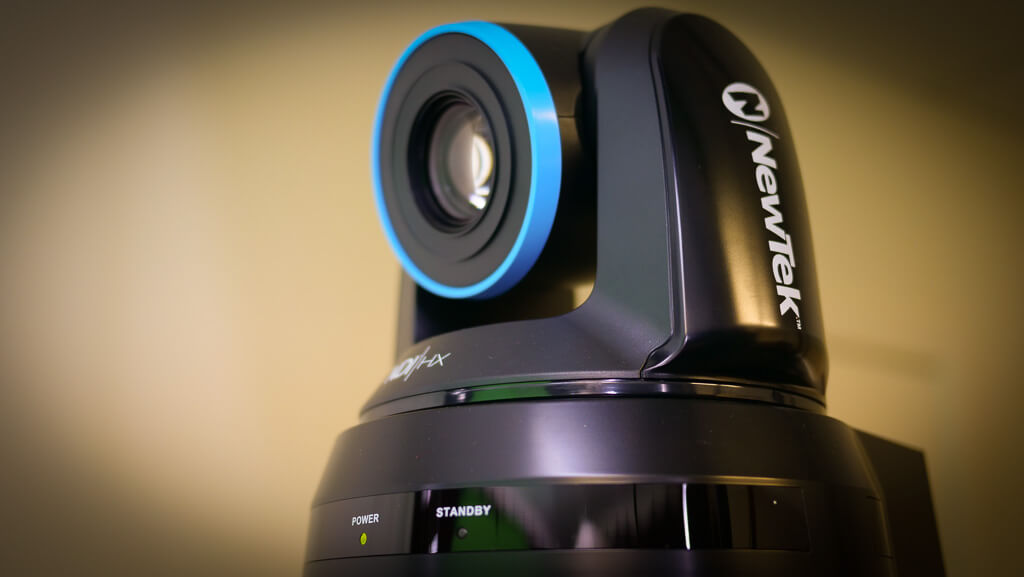 Although the PTZ1 is the only native NDI camera on the market, NewTek have been working with a number of other manufacturers to be able to upgrade their existing firmware for NDI Support. PTZ Optics are one of those companies, and we’ve been fortunate enough to test out their 12x with the NDI|HX upgrade. The camera has been really good and a great addition to our ALL NDI studio. The firmware upgrade is still in beta, but they’re hoping to have it released soon. They are also looking to have their own PTZ|HX line out later this year (2018). 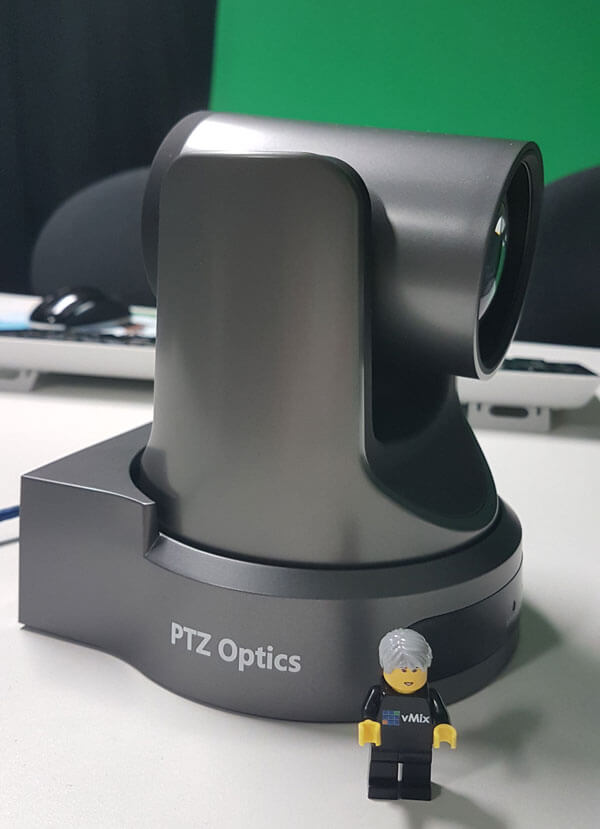 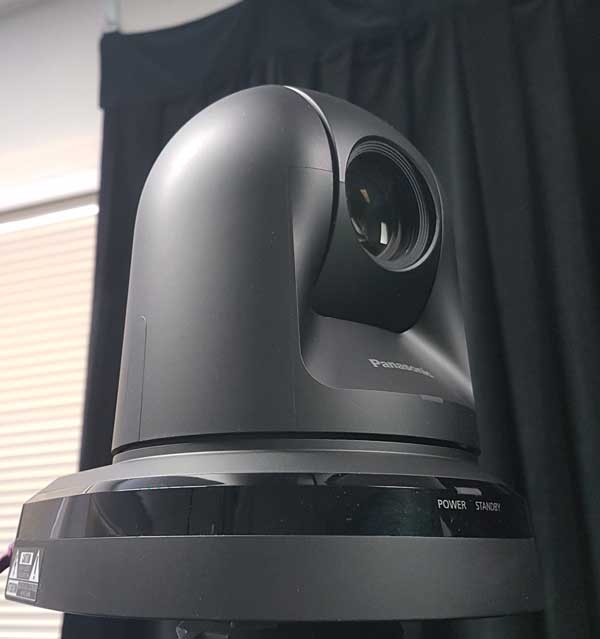 You know what’s handy? Having a Panasonic AW HE 40 lying around! Why’s that? Well Panasonic now allows you upgrade certain PTZ cameras to NDI|HX! That means we just needed an NDI |HX license for the camera and we were good to go. We had previously used this camera in our old studio, so it was like welcoming back an old friend to the fold. It’s a great camera and now even better that is capable of high-quality low-latency video over the network!

An NDI Studio Ready To Go!

Now that we have all of this NDI equipment available, it’s time to put it into action! Click here to check out our NDI Studio Setup.