All NDI All The Time!

In our last post we discussed how far NDI had come and how we now have access hardware based NDI solutions! We were super eager to get access to NDI based hardware so that we could start implementing it into our vMix HQ studio. Having hardware products really cements the functionality of the standard in a working studio environment. People have seen NDI as a cool way to transfer some titles or video but cameras and converters show people its full potential! NDI hardware lessens the equipment footprint of a production and makes each element of a production accessible to everyone on the same network, which is great for small and large productions alike.

Piecing together the vMix NDI studio.

I was sitting in the office in December and thought…

Hey! I think we could just about put together an entirely NDI show! Let’s send some emails and see if we can do it!

After some correspondence we were able to secure the NewTek™ Spark Connect, NewTek PTZ1 camera, and the PTZOptics NDI|HX upgrade! Along with our existing BirdDog Studio, we we able to use 4 NDI sources in our production! One major upgrade to our studio that we did need was a PoE+ switch to run all of our new PoE NDI devices! We bought a Ubiquiti UniFi Switch 24- 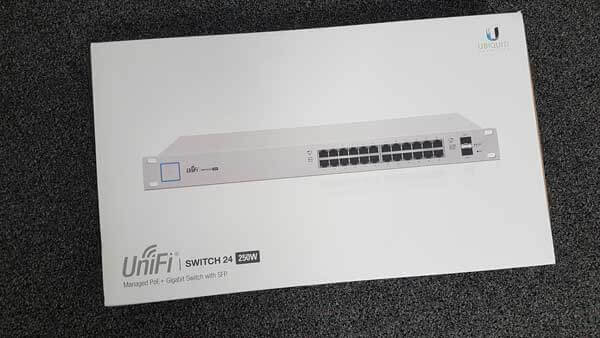 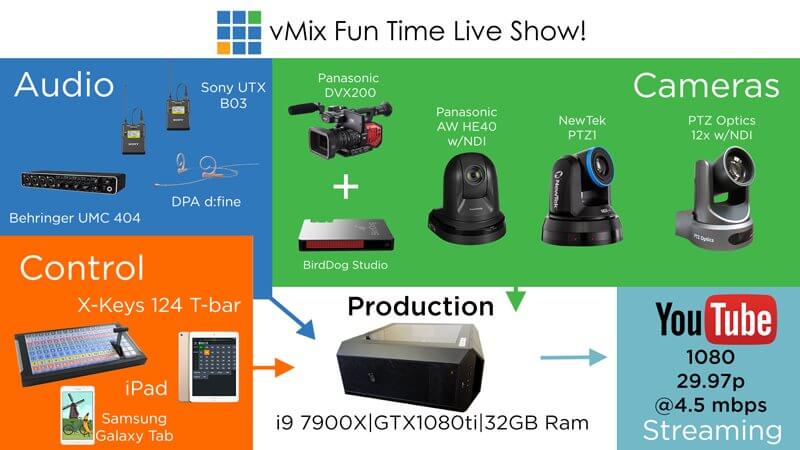 We were able to connect 2 existing cameras to the converters and also use the 2 NDI|HX PTZ cameras. As we use the Panasonic DVX200 as our main camera, it was great to be able to have the BirdDog Studio converter using the full NDI bandwidth for the shot we used the most. Everything went really smoothly and we didn’t have any issues, which was outstanding. As our studio was never purpose-built for NDI, the behind the scenes looked a little messy! When we first set up the studio we ran SDI and HDMI cabling through the ceiling to make it fairly clean. However, as our studio is away from our main testing area and network infrastructure, we had to run long Ethernet cables from the different devices back to our gigabit PoE+ switch in the other room. It made our studio look like a cabling factory for a little while.

For December we decided to do 2 shows so that we could reach both the US and the EMEA markets! Double Time Zone Live Streaming! Or DTZLS for short! We used the NDI setup for both shows and both shows went well! We had a star-studded line-up that included Dan from BirdDog and Paul from PTZOptics to talk about their NDI product lines. You can check out the show here-

Ok, so we were only 1 show into our vMix HQ NDI Studio when we got some exciting news. A Panasonic press release revealed that they were introducing NDI|HX to some of the cameras, including the possibilities of an NDI|HX upgrade on existing models! This news was great for us as we have a Panasonic AW HE40 just lying around in our studio already! It was just a matter of having an NDI|HX license and then updating the camera! We hadn’t used the Panasonic PTZ camera in a while, so the NDI|HX upgrade breathed new life into the camera for us. We also decided that our Ethernet cable labyrinth that we had was fun at first, but it needed to go. We purchased an 8 port TP-Link PoE+ Router for the studio so we didn’t have to run everything back to our testing area. With the additional switch we just needed the 1 ethernet cable!

The January show featured NewTek CTO Dr Andrew Cross to chat about NDI and it was great to hear his insights and have a chat with the creator of NDI. We traded out the Connect Spark for the Panasonic NDI Camera so we had 3 cameras using NDI|HX and our Panasonic DVX200 using the BirdDog Studio.

Seeing as we had changed our studio, we thought we should make another Studio Tour that includes all of the changes. The studio tour from last year included all of our capture gear and a look at all the equipment over the years. The new studio is all about the future and working with IP video for live video production and live streaming. We’re pretty excited that we’ve been able to setup an ALL NDI studio! It seemed like a distant dream but now that it’s all finally here, it’s just as dreamy as we’d hoped!