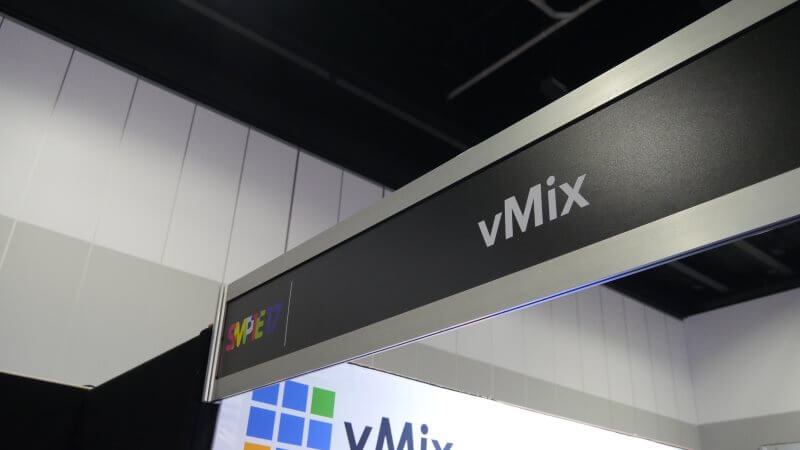 vMix had a small hotdog stand at the Darling Harbour International Convention Centre for SMPTE. It only comes around once every two years and this year saw a switch back to the newly built ICC. Thankfully the rain and cold that typically accompanies Sydney in winter stayed away for the week! 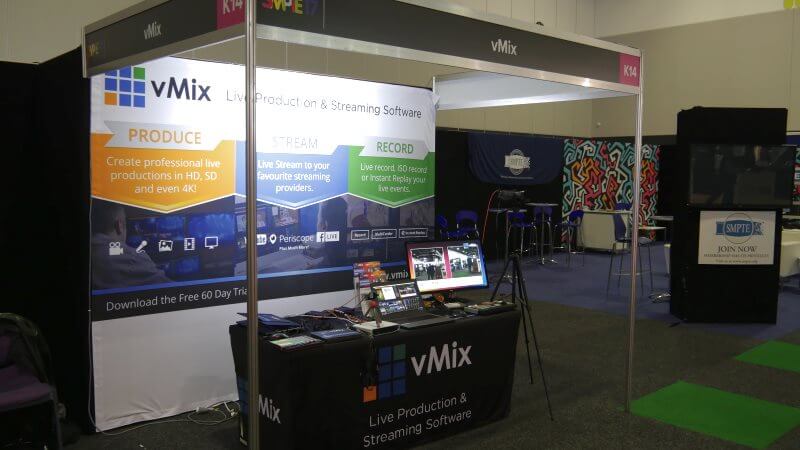 For Australian shows most companies are represented by distributors or resellers. In fact, most brands had multiple resellers on the show floor which makes it all a little bit confusing. We let everyone know that vMix was Australian based and that we weren’t just distributing vMix…we WERE vMix. We had a small portable setup with the Sapphire laptop system, AJA io4K, Sony PX70 cameras, Marshall 502 camera, X-Keys 124 T-bar and a 27 inch monitor. It’s a great way to show what can be done with equipment that you can fit into a backpack. We had 3 mousepads left at the end of the week, which was great! I’m sure there are some people this morning that are looking at it and wondering where on Earth it came from.

On Wednesday morning we had a live cross from the vMix Fun Time Live Show to the floor, which surprisingly went off without a hitch. You can see it in the video below. The Audio Technica USB Mic was added to the setup to provide the audio and for a loud and busy showroom floor, the microphone worked very well. 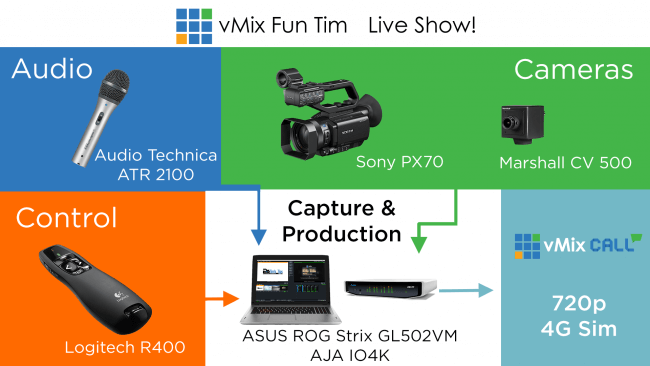 vMix has a 2 month break between shows, which is exciting and will give us some time to recuperate! In September we’ll be venturing off to Europe to go to Amsterdam for IBC. 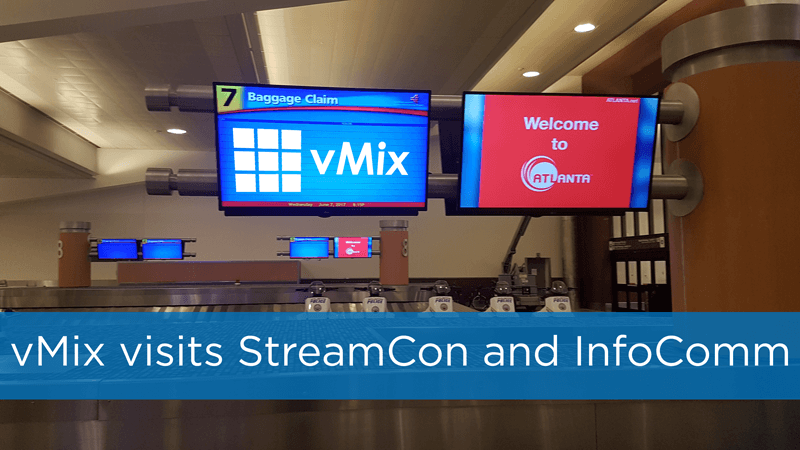 vMix was back to the USA for the second time in just a matter of months in 2017. This time around it was to visit Atlanta and Orlando for StreamCon and InfoComm. After a looong journey from the Gold Coast to Atlanta (a full day), we arrived in Atlanta ready to talk live streaming.

StreamCon was a great time to talk with Live Streaming enthusiasts! Everyone that attended had a real passion for live production and were willing learn from others and also share their experiences. Having hands-on demonstrations of a working live sports van and other streaming technologies opened up many discussions and opportunities to learn. Martin gave the opening address to talk about where vMix had come from and how it sprung from our own need to solve problems within our own live production experiences. vMix 20 features were also revealed! The second day involved more of a business approach with detailed models of how people like Scott Pienta and Jim Jacobs had created revenue streams from the live productions. Attendees at the convention left with plenty to think about and ways to improve upon what they were doing. 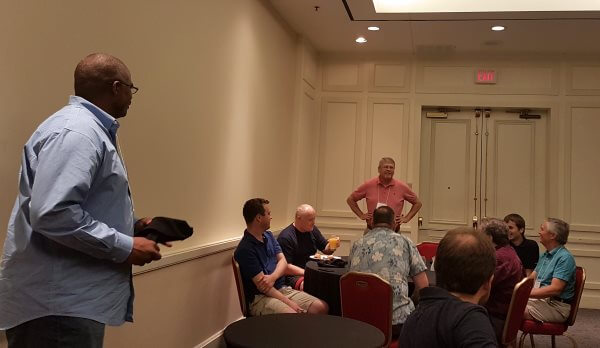 From Atlanta we headed to warm Orlando where we attended InfoComm. We were graciously allowed to hang out in the P.I Engineering booth for the 3 days. They are the makers of X-Keys and have a great working integration with vMix. 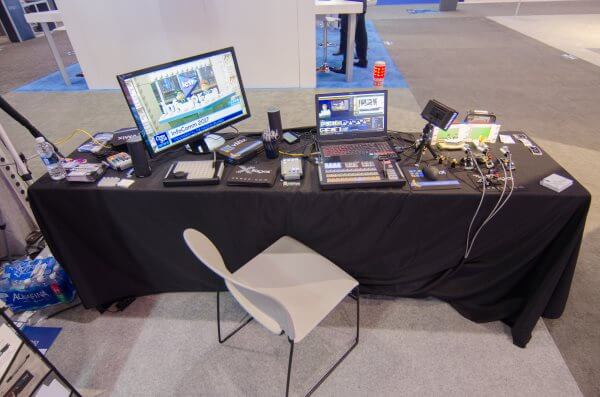 A full vMix live news how was created with Lego to fully demonstrate how you can produce a show using the X-Keys 124 T-Bar model. It was complete with an animated news intro, triggers, tally lights and multiple cameras! The attention to detail was incredible. 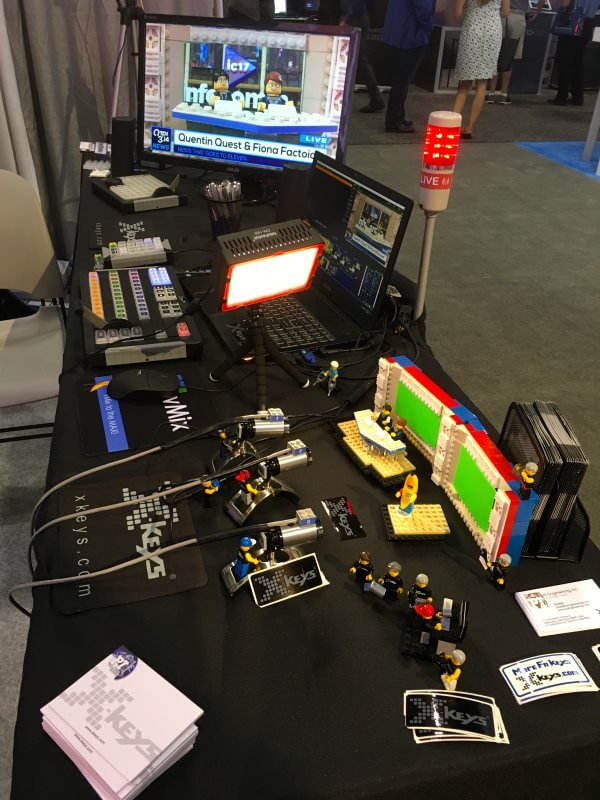 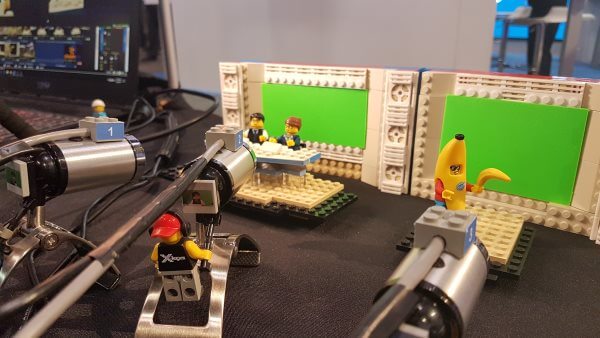 It was great to be able to catch up with X-Keys users that were working with vMix and also all of our hardware partners that were at the show. It’s nice to walk around the convention halls and see vMix being used all over the place!

We’ll be back to the US later in the year to go to NAB Show New York in October and Streaming Media West in November. They will be great opportunities to check out all the latest in video production and live streaming and to come and talk to us if you so desire! 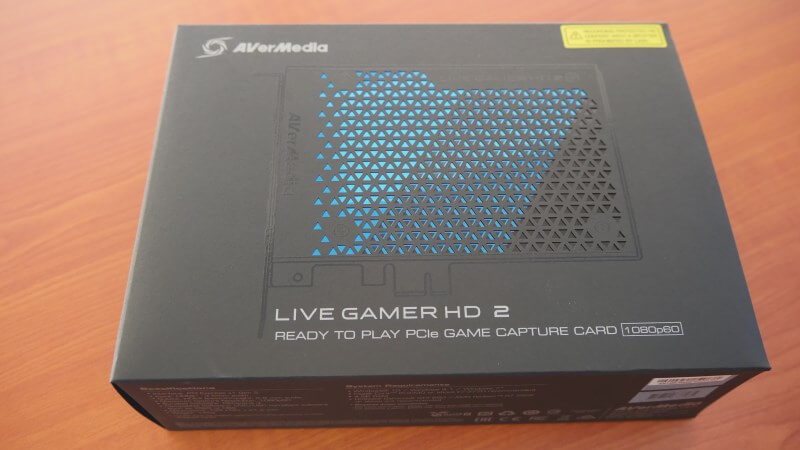 vMix users can now take advantage of the latest AVerMedia capture card to hit the market. The AVerMedia Live Gamer HD 2 supports up to 1080 60p and has HDMI pass-through. To find out more information about this card, you can check out all the specs on the AVerMedia website. vMix also supports other AVerMedia capture devices and the full list of vMix supported hardware can be found on the Supported Hardware page of our website. 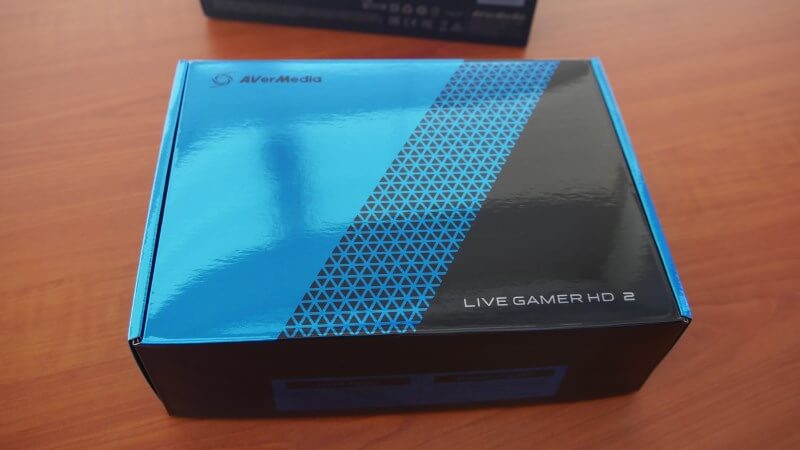 vMix offers producers a powerful, reliable and affordable solution for live video production and live streaming. It’s supports full frame rates including 1080 60p for crisp gameplay and sports footage using cards such as the AVerMedia Live Gamer HD2. vMix also allows you to use 4K sources if you have the necessary capture equipment. Quality doesn’t need to suffer when you’re live streaming! Quite often live streaming is considered an afterthought but that’s no longer the case. Create live streaming productions that rival TV broadcasts all from 1 PC with vMix! 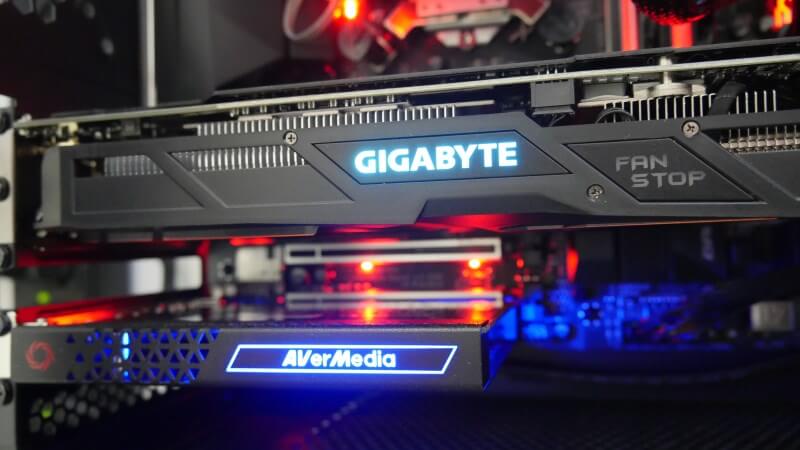 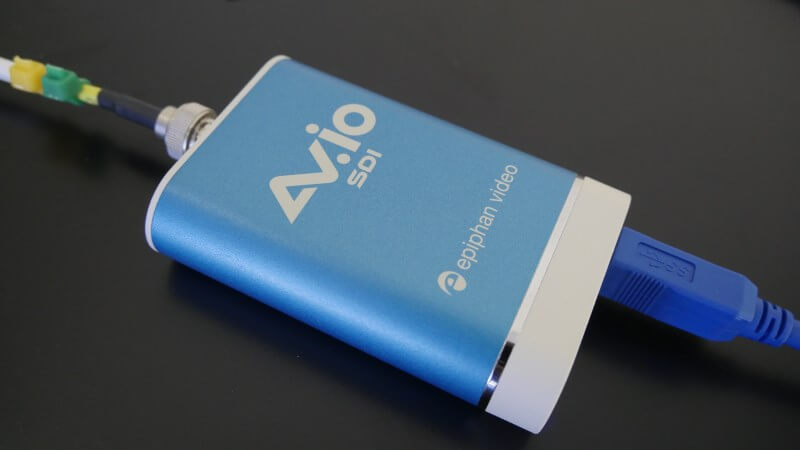 Now that NAB 2017 is complete we’re back at vMix HQ testing out products sent to us from NAB. We were able to speak to Epiphan who have sent us the SDI and 4K models of their AV.io capture line.  These are portable USB 3 capture devices that suit a range of needs and connections. We’ve tested these models and have added them to the vMix Supported Hardware page.

vMix has allowed users to to produce, stream and record in 4k for the last 3 years. Now with portable devices such as the AV.io 4K model you can easily bring in 4K sources over USB3. For full frame rates you will need to select the NV12 video format when adding the camera input in vMix. 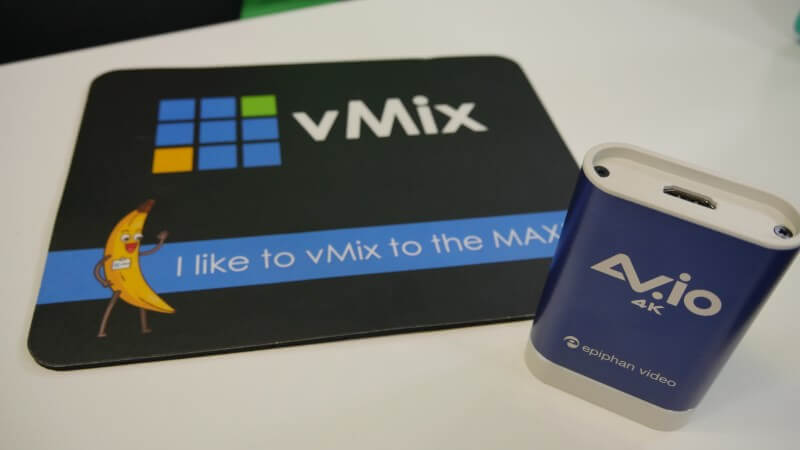 The full range of AV.io capture devices, including the 4K and SDI models, can be purchased via the Epiphan website. If you have any questions about portable production and how you can use AV.io’s in your live production workflow, feel free to send us an email- https://www.vmix.com/contact-us.aspx 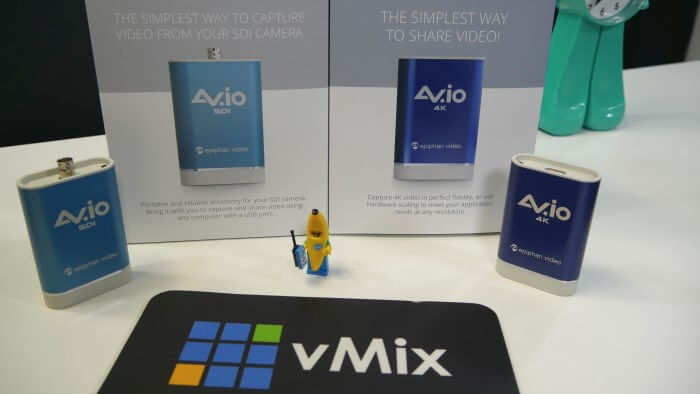 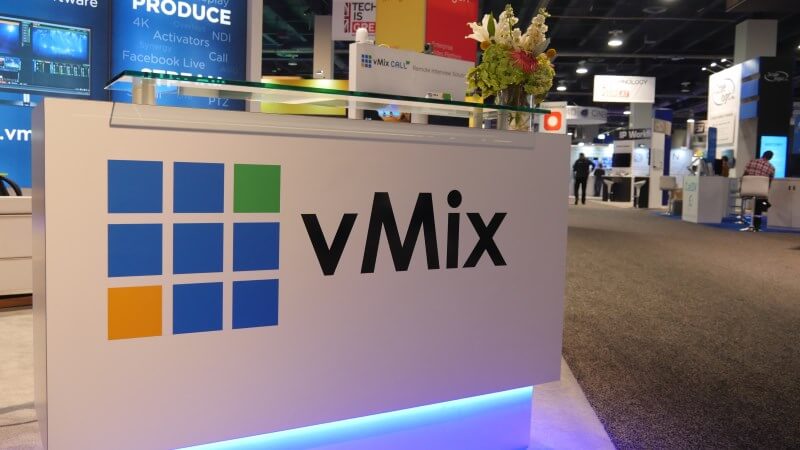 The National Association of Broadcasters convention 2017 is over for another year and it was a successful one for vMix. Over 100,000 people attended this year with most of those wearing their trusty vMix NAB lanyard! This year we had a new booth designed that would highlight each of the main features of vMix. We didn’t include a live stage this year as we counted 12 live shows taking place from the show floor in 2017, some of which were powered by vMix. The 6 areas featured vMix Call, Instant Replay, 4K, IP Production, Portable solutions and vMix control. It gave everyone that visited the booth a glimpse at all of the different capabilities and scenarios that vMix could be used in. 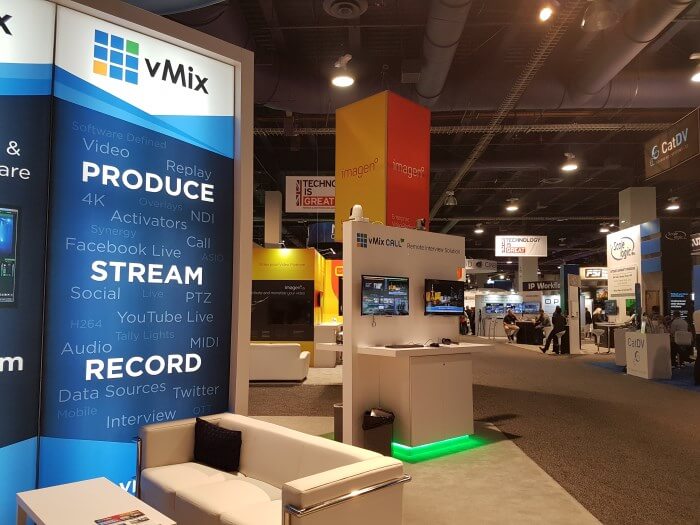 All of the partners!

As we’re over from Australia we get to Las Vegas early to acclimatize and to prepare for the show. You never know when you might need something extra or need to make some changes. We were all ready to go by Sunday and then we finished off the booth by receiving all of our partner’s gear to display at the show (most of them arrive a lot later than us!). This year we had X-Keys, JL Cooper and Skaarhoj controllers for people to use and try within a vMix workflow. We also had a Magewell 4K card in our 4K workstation. Our portable solutions section featured the AJA U-TAP, iO4K and the RovoCam. 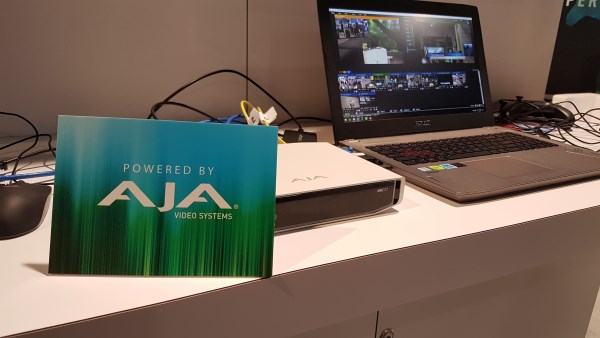 It was great to be able to feature many different NAB partners and be able to create a great network at the show. People would drop by and say that they had been sent to us from AJA, PTZ Optics etc. In turn we would send through people to partner booths if they further questions about the products featured in our booth. The PTZ Optics team were using vMix in their booth for their live streams and we also had a camera of theirs hooked up to our X-Box One remote to show off their PTZ Control integration. At one point they connected to our booth via vMix Call and participated in a live stream by Tom Sinclair. 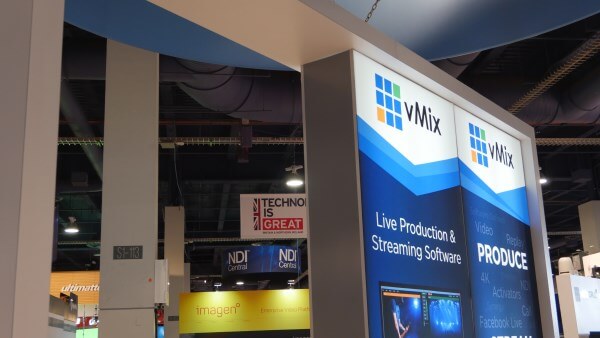 vMix all over the world.

NAB is a great opportunity for vMix to talk to users from all over the world. We spoke to people from just down the road in Los Angeles, India, Japan, Europe, Africa and every country you could think of! It’s interesting to see just how people use vMix in all kinds of locations and situations. People from big sporting events, colleges, Churches, Youtubers, Twitch Streamers, you name it…they came by to chat to us how they were using vMix. 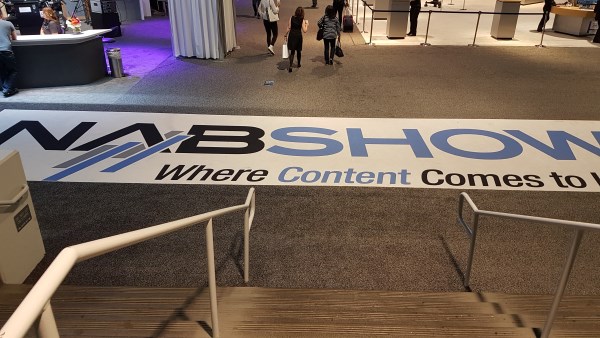 vMix had a great position at NAB show 2017 which allowed for some great foot traffic! We were right next door to NewTek and the NDI™ Connect booth which meant we had a lot of people talking about NDI and how they could use vMix in their IP workflow. The opportunity to become an official sponsor and be added to the NAB lanyard was a huge plus. We would be out at the grocery store or walking down the Las Vegas strip and see people wearing the vMix logo! I kept having to tell myself that I didn’t know the person wearing the lanyard as I’m so used to only seeing it on vMix people. If you watch any NAB 2017 interview or see any photos, you’ll be able to see the vMix logo in it! We were also able to go on the NDI Central live stream to briefly talk about how vMix supports NDI. It was a whirlwind show but it was good to be able to talk about how much we like NDI. 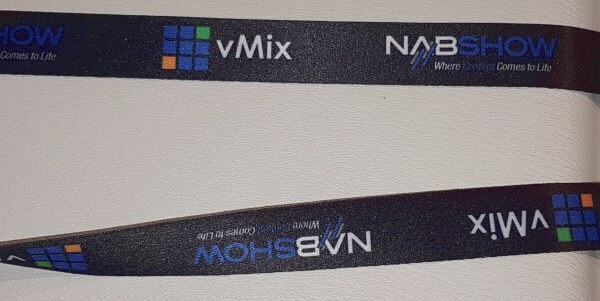 vMix 19 was featured by Streaming Media Magazine in their Best of NAB 2017 Awards! It was a great honour and we’re happy to see vMix Call be recognised in the industry. 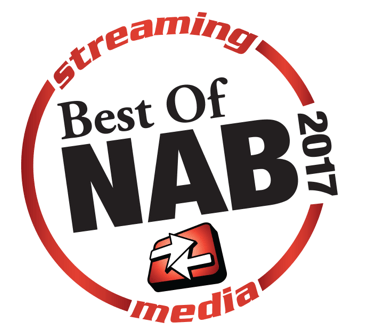 vMix in use around NAB

For the 4th straight year Teradek used vMix to produce their live show which reaches 100,000’s of viewers during the week. In our booth we even had an NDI link up to the Teradek booth and had the show being displayed on our IP Production workstation. Once again vMix provided a rock-solid production for the entire week. Here’s Martin on the last show of the week- 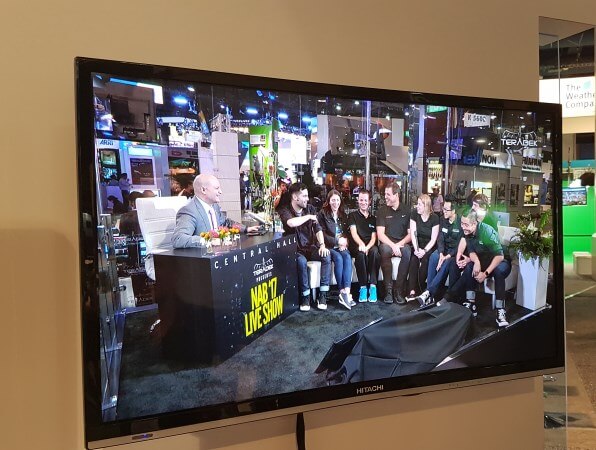 X-Keys created an AMAZING live demo of vMix using their 124 T-Bar controller! They had a live TV news studio featuring Dan our mascot as the weather man. It surely was a sight to be seen! You can check out their videos on their Facebook page. 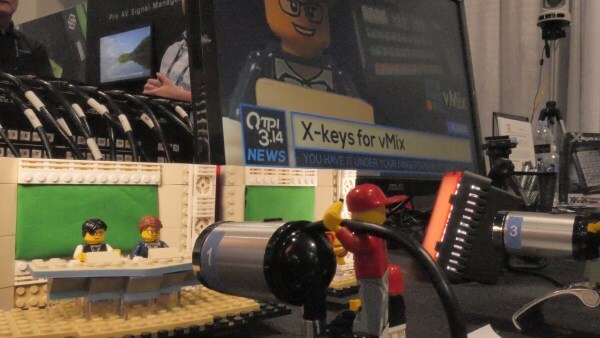 vMix was also featured by AJA, PTZ Optics, Skaarhoj, P.I Engineering, Bird-Dog and a few others that swore me to secrecy! vMix could also be seen in the 360 pavillion where they used it do projection mapping for the Insta360 cam on the inside of a circular tent! It was pretty cool. 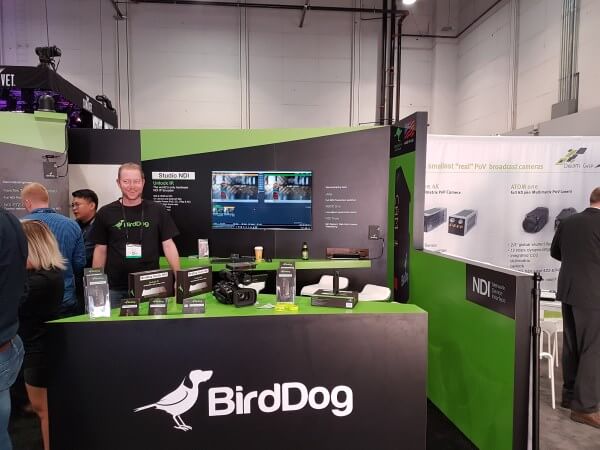 We’ll be back again next year, so if you want to come to NAB in 2018 I would definitely start planning now. It’s a great week to be able to connect with ALL of the companies that do cameras, capture cards, CDNs, NDI gear, and a whole lot more. You can actually ask the creators of products direct questions and hopefully get a direct answer. We love seeing vMixers there and talking to new people about how to improve their live video production. We hope that in years to come people won’t just settle when it comes to live streaming! Live streaming quality can be just as good as any other broadcast medium, especially if you use vMix! A big thanks to everyone that helped us out or stopped by the booth in 2017. We’ll see you next year.